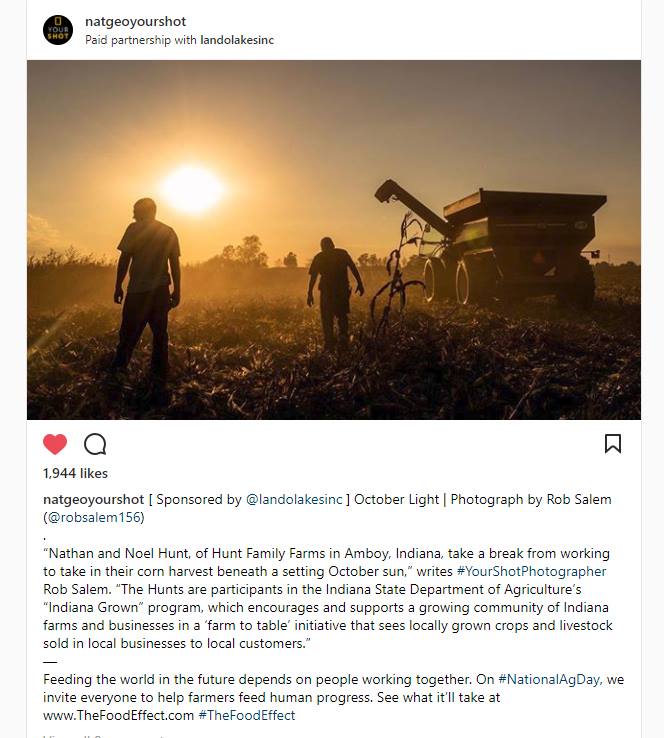 Something that’s been bothering me lately is the tendency of others to always make art about money.

Before I go any further, I want to clearly state that I’m absolutely in favor of artists of all mediums being compensated fairly for their work, and that the above statement is relevant to a specific phenomenon I’ve encountered several times recently:

I’ve shared some things that I felt were cool achievements with my photography (most recently having one of my photos shared by National Geographic’s Your Shot Instagram account as part of their recognition of National Ag Day — see the above image) and inevitably I’ve gotten either comments or messages from people wanting to know if I got paid for that particular piece of work.

And you know what?

Even as an advocate for artists to receive fair compensation for their work, I understand (especially as someone who does freelance work) that there are times when the rewards for doing unpaid work are absolutely worth it. In other words, it is okay to -sometimes- work for “exposure.”

In general, I hate the notion of working for exposure, because in most cases it does devalue not only the artist’s work (time, education/training/apprenticeship, materials, etc) but it also devalues the art itself. In general, I tend to loathe anyone that simply -expects- an artist to work for free after uttering that dreaded phrase, “I can’t pay you, but I can offer exposure. Often, the person making that “offer” is someone who can’t offer any real exposure, meaning that the audience for the requested work is going to minimal and the “exposure” isn’t going to bring in other work.

That said, there are times when the exposure offered can be a real thing; for instance, a local unknown band opening for Metallica stands to potentially gain more from the exposure they’d get playing in front of an audience tens of thousands strong than the bit of cash they might get paid at such a gig. (Metallica is an extreme example, of course, but it helps make the point, I think.) Similarly, my photo above being shared by a legitimate National Geographic account meant that I received global exposure on a level that I yet hadn’t; not that it really matters, but I did get paid to take that particular photo–not by NatGeo, but by the client I was doing the photo work for to begin with (Your Shot is NatGeo’s version of social media for photographers–the big thing about it is that it’s curated by NatGeo editors who select the best images from thousands of daily submissions for various features and stories, and sometimes publication in one of their magazines). Likewise, I’m currently working on photos I took for a major marketing campaign by a significant non-profit organization; I’m doing that work for free (well… I did get a great lunch out of it the day we did the photo shoot), but I know for a fact that the exposure I’m getting by taking on this project is going to boost both my resume and my portfolio while also helping with that most critical of things in this business: networking–more jobs are sure to follow because of this work.

When an artist shares something to celebrate an accomplishment or milestone in their work, asking if they got paid is a sure way to make sure they feel like shit, whether or not they did get paid for that particular work. Because what you’ve done is tell them that money is more important than their accomplishment, and you’ve immediately devalued the entire moment. You may mean well by trying to suggest that their work is good enough that they deserve to be paid, but you’ve changed the discussion at the point from celebration to money. Which, by the way, isn’t any of your business.

I’d wager that while there are artists who get paid for almost every single thing they create, every artist creates works that aren’t about money. We create because we love to. Because we have to. Because we need to. We’re driven by the need to write music or paint or draw or dance or make videos or take pictures or throw pottery or write books or any whatever our particular form of expression is. But that, right there is exactly what it’s about: expression. Most of us create artistic works simply for the sake of creating art. It’s an essential element of our being, and we’ll create even if we don’t get paid to do so.

I’m fortunate to have a great part-time photography job that ensures a regular paycheck while also allowing me to pursue my own freelance work. But I also do plenty of work outside of both pursuits, working to capture images that I want to see, just because I want to see them. If someone wants to buy them, great. If not, I’ve still gotten the satisfaction of creating just because I could. I’m extra fortunate in that for the most part, both my “regular” gig and many of my freelance jobs have coincided with a lot of my personal interests, so I get to pretty much do everything I enjoy and get paid for it.

In the end, it’s ultimately up to the artist to decide if they deserve to be paid for their work, and to negotiate what they feel is fair compensation, or to take on a project under the promise of exposure. A lot of us will fall into the trap of working for free too often and for too long, but at some point there is responsibility on the consumer’s end of things to not ask artists to constantly work for free. Unfortunately, there are enough who always will that I don’t know if that’s a cycle that will ever get broken.

Ultimately, my point is what I’ve said a couple times now:

Let an artist celebrate their accomplishments when they choose to share them with you. Don’t be the person that opens up a public conversation about whether or not they got paid for that. Whether or not the artist got paid isn’t any of your business. Just enjoy their moment of success with them. If you can’t do that, just enjoy that they shared their art.

Skol! Welcome to my blog! I am Rob Salem, photographer, artist, graphic designer, videographer, writer, and musician. This blog is sort of a catch-all for my various endeavors and interests, so you’ll find a bit of everything here. Thanks for dropping by!